AT&T’s (T) net postpaid additions are expected to continue to contract YoY (year-over-year) during the quarter. According to the consensus estimate of Wall Street analysts, the company’s postpaid net additions are projected to be ~0.3 million in 1Q16 as compared to ~0.44 million in 1Q15.

On a YoY basis, the telecom company’s net postpaid additions declined significantly in 4Q15. AT&T had postpaid net additions of ~0.53 million in 4Q15 as compared to ~0.85 million during 4Q14. 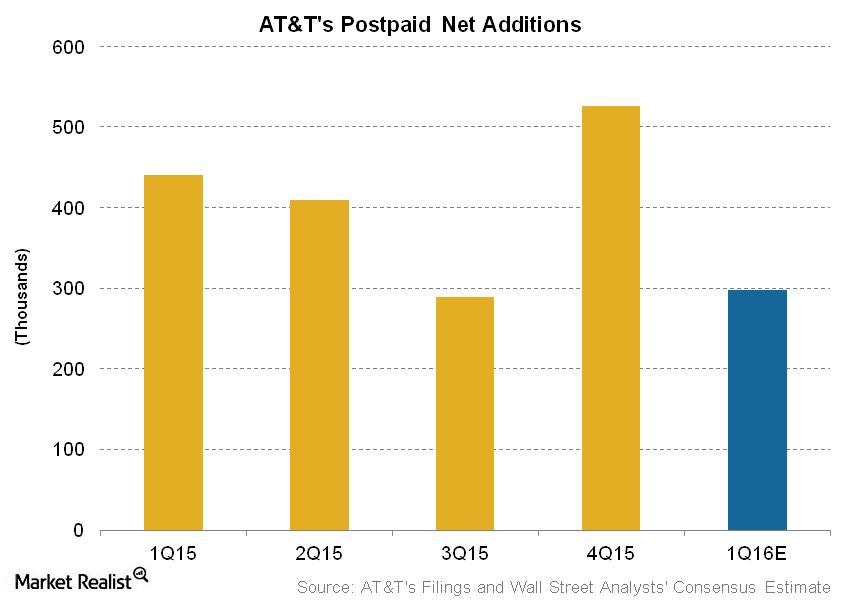 Given its 4Q15 figures, in terms of the wireless postpaid base, AT&T is the second-largest player in the US. It follows Verizon (VZ), and as of the end of the same quarter, the third- and fourth-biggest players in this wireless customer metric are T-Mobile (TMUS) and Sprint (S).

In 4Q15, among the top four US wireless players, the postpaid net additions of Verizon and T-Mobile were solid at ~1.5 million and ~1.3 million, respectively. Meanwhile, this metric for Sprint (S) was at ~0.5 million during the same period.

For diversified exposure to telecom players in the US, you might consider investing in the iShares Russell 1000 Value ETF (IWD). IWD held a total of ~2.7% in AT&T, Verizon, Level 3 Communications (LVLT), CenturyLink (CTL), and T-Mobile at the end of March 2016.