Since 2010, Prudential Financial (PRU) has returned approximately $10 billion to shareholders in the form of dividends and buybacks. This is beyond the capital it deployed to support organic growth in mergers and acquisitions.

The company deploys its capital on new initiatives, the expansion of product lines, and technology upgrades to increase its global presence. It also uses cash flows to reward shareholders through dividends and stock repurchases.

The company declared a quarterly dividend of $0.70 per share, a rise of 21% compared to the previous quarter, translating to an annualized dividend yield of 3.9% based on current prices. 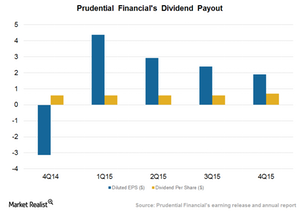 The company’s dividend yield has remained at par with other players in the insurance business, which form 20.6% of the iShares MSCI ACWI ETF (ACWI). The distributions formed 1.8% of the company’s total market capitalization of $31 billion.

Prudential Financial increased its share repurchase authorization by 50% to $1.5 billion in 2016, reflecting the company’s increased confidence in its current valuation as well as its long-term prospects.

In 4Q15, the company repurchased ~3.1 million shares for $250 million at an average price of $80.8 per share. The repurchases were made under the authorization of $1 billion that was announced by the board on June 9, 2015.

Since the commencement of share repurchases in July 2011, Prudential has made a total repurchase of 65 million of its common stock, forming 14% of total outstanding shares. The repurchases were made at a cost of $4.4 billion at an average price of $67.7 per share.