In its 4Q15 earnings release on January 28, 2016, Blackstone (BX) reported an economic income of $163 million in its private equity division. Its total revenue was $361 million compared to $908 million in the same quarter last year. Compared to the previous quarter, Blackstone’s private equity portfolio value rose by 2.8%, which was mainly due to public portfolio appreciation. Domestic equity (SPY) improved marginally after the stock market rout in the beginning of 2016. The company’s holding in Hilton Worldwide (HLT) fell by 0.42% in the first quarter of 2016. The division’s assets under management expanded by 29% to $94 billion as of December 31, 2015, compared to the same quarter last year. Its fee earnings from assets under management expanded by 17% to $51 billion during the same period. 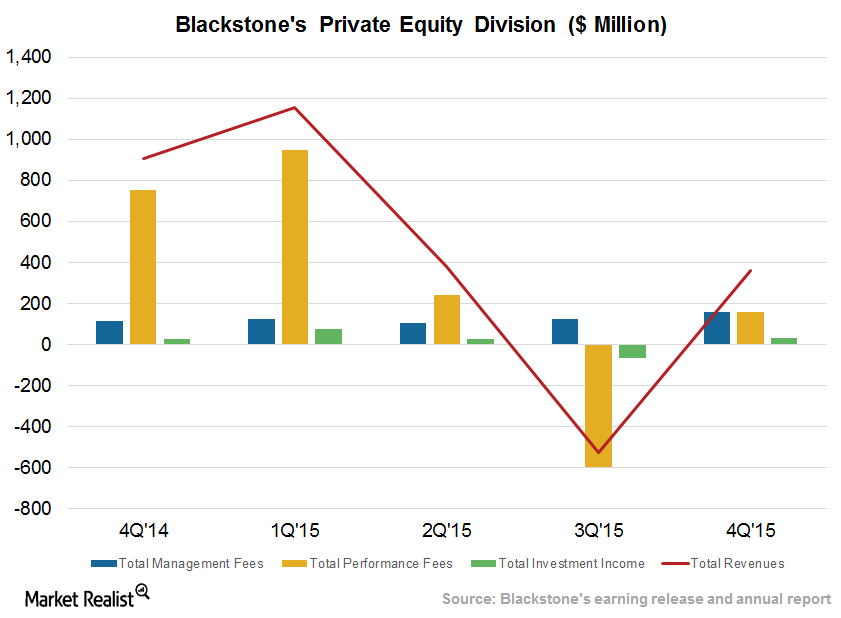 The company’s private equity portfolio rose by 9.5% in 2015 compared to a 0.7% fall in the S&P 500 during the same period. The division’s performance and investment income stood at $161 million and $33 million, respectively.

The company deployed new capital of $5.3 billion during the quarter. It committed an additional $1.2 billion for new investments and accretive add-on acquisitions to the portfolio. The company’s deployments in the fourth quarter formed almost 50% of the full-year investments. Blackstone has been aggressive in terms of fund deployment when the market offers attractive valuations. The company has strong dry powder compared to other alternatives like the Carlyle Group (CG) and KKR & Co. (KKR).