Chinese search giant Baidu (BIDU) is finding it difficult to generate large enough margins from its video streaming portal, iqiyi.com. During its latest quarter, iQiyi actually brought the company’s operating margin down by 5.4% due to increases in content costs, according to Baidu.

The company holds about 80.5% stake in iQiyi, which delivers both original and licensed video content. Recently, Baidu has received a proposal from its chairman and iQiyi’s CEO (chief executive officer) to buy iQiyi for $2.8 billion, excluding cash and debt. 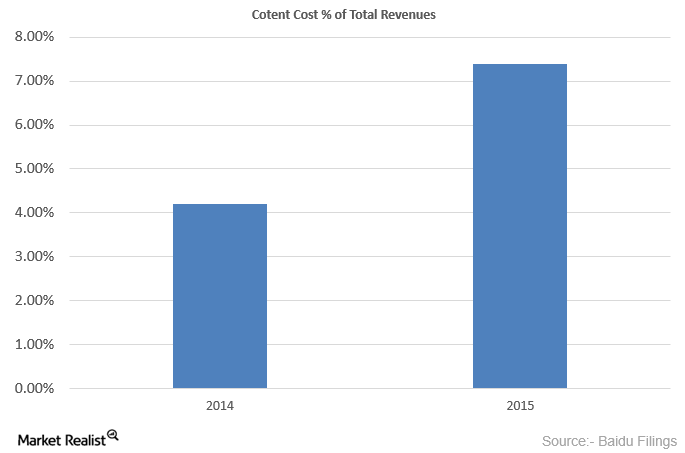 The market reaction to this announcement remains positive, with investors driving Baidu’s shares up by 8%. Since the buyout proposal on February 12, the company’s shares have been trading about 20% higher. By selling its video streaming portal, the company can focus on its transaction services. Transaction services connect online users to brick-and-mortar services such as food delivery and movie ticketing. According to Robin Li, Baidu’s CEO, the overall size of the O2O (online-to-offline) market is expected to grow to more than $1.1 trillion by 2017.

Baidu has thus been investing heavily on iQiyi to compete against Google’s (GOOG) YouTube and Netflix (NFLX). In fact, Alibaba’s (BABA) video site in China (MCHI), Youku Tudou, has a comparable number of visitors as iQiyi, according to Deutsche Bank. However, Youku Tudou is better at monetizing its users than iQiyi. According to Wall Street Journal, Youku Tudou generated $260 million in its second fiscal quarter last year, which is ~61% more in revenues than iQiyi generated during the same period.

Continue to the next part for a look at Baidu’s latest offering for US carmakers.