So far, we saw that Intel (INTC) is expected to report a slight growth in revenue in fiscal 4Q15. New product launches in the PC and IoT (Internet of Things) space are expected to push revenue upward in these areas. Let’s now look at some other announcements by Intel over the fourth quarter and their likely impact on earnings. 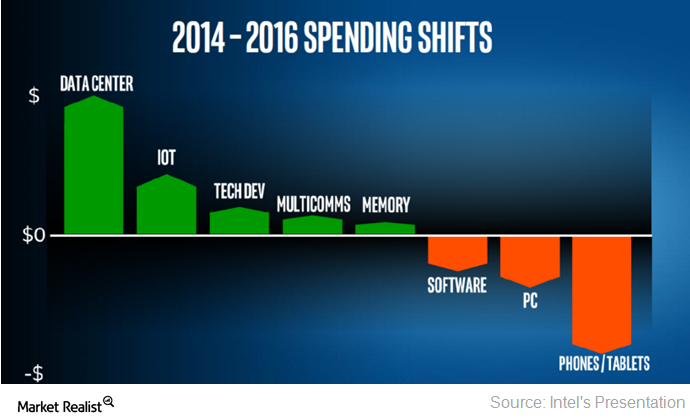 N. Quinn Bolton, a Needham analyst, expects Altera to add $2 billion to Intel’s revenue in fiscal 2016. The fiscal 2016 earnings will see the addition of the PSG (programmable solutions group), a whole new business segment that will be managed by Altera. The group will work along with the data center, IoT (Internet of Things), and memory group to integrate its FPGA (field-programmable gate array) in Intel’s chips.

In Intel’s guidance for fiscal 4Q15, the company stated that it expects to spend $5 billion on R&D (research and development and M&A (merger and acquisition), similar to the amount spent in fiscal 4Q14. Some of this amount has been spent in the following areas:

These investments, if successful, would bear fruit in the long term.

In the last part of the series, we’ll discuss the valuation metrics that determine a stock’s earnings capacity. The Technology Select Sector SPDR Fund (XLK) has ~10% exposure in the semiconductor industry. It invests 3.1% of its portfolio in INTC.