Prices remained significantly below the key moving averages. Amid the sluggish export demand for US wheat, prices are expected to remain under pressure in the near term after the correction. The chart below suggests that prices could oscillate in the range of 455 cents–470 cents per bushel in the near term. 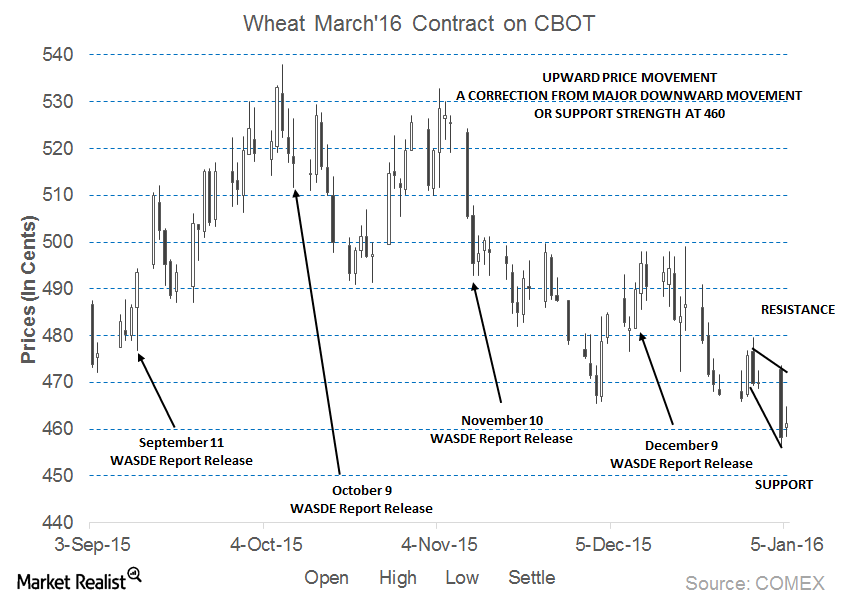 An unfavorable rainy weather forecast for the Midwest, Mississippi Delta, and Eastern regions of the US wheat belt adversely affected output sentiments and supported prices.

The currency crisis in Egypt, the biggest importer of wheat, negatively influenced the export demand sentiments. Russia and Ukraine could escape the winterkill as the vulnerable areas of wheat production were significantly less cold. This supported output sentiment from these regions and negatively affected US wheat. The US dollar appreciated by 0.51% on January 5, 2016, which adversely affected wheat exports sentiment on the day.

The advance in wheat prices is unfavorable for food companies. With the rise in wheat prices on January 6, 2016, food businesses such as General Mills (GIS) fell by 0.49% on the fourth consecutive trading day.

On the other hand, J.M. Smucker (SJM), Pilgrim’s Pride Corporation (PPC), and Hormel Foods Corp. (HRL) put an end to the declining price movements for three, three, and four trading days, respectively. The shares of these companies increased by 0.75%, 1.8%, and 2%, respectively, on January 5, 2016. The VanEck Vectors Agribusiness ETF (MOO) fell by 0.09% with its fourth consecutive day of decline on January 5, 2016.