United Continental Holdings (UAL) announced its 4Q15 earnings in the early hours of January 21, 2016. The airline fell slightly short of the consensus estimates for its earnings per share and revenues. 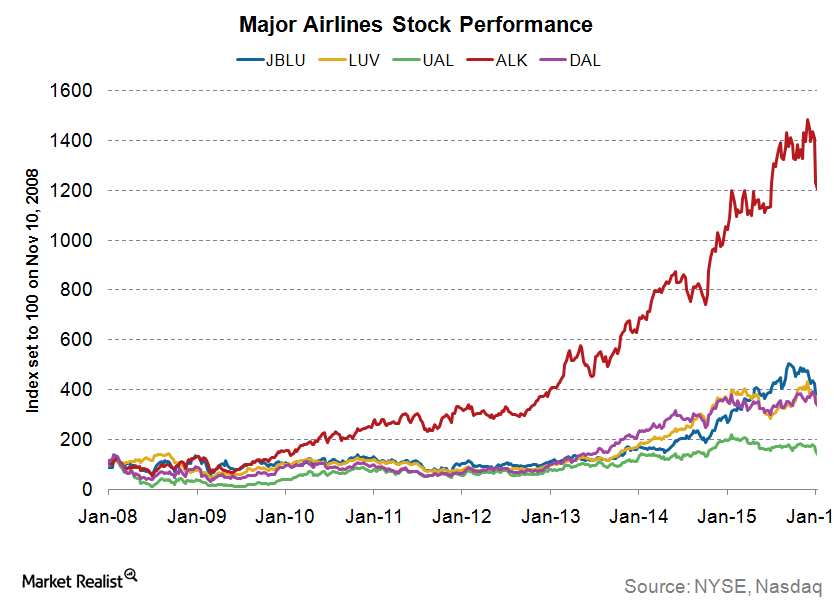 Despite missing its estimates, UAL’s stock was up by 0.5% at the end of the day. This is because the airline had recently announced that it expected its fourth-quarter revenue figure to be weaker than previously expected. This was affected by the terror attacks in Paris and by the cutbacks in air travel by employees of the energy sector.

United Continental (UAL) hasn’t had a strong year in the market, and it slipped by ~12% during 2015. This is in line with its larger legacy peer American Airlines (AAL), which fell off by 18% in the year. The other two key players, Delta Air Lines (DAL) and Alaska Air Group (ALK) gained 4.7% and 36%, respectively.

Because air travel depends on discretionary spending, it makes sense to compare the airline industry’s performance to the consumer discretionary sector. The Consumer Discretionary SPDR ETF (XLY) rose by 8% during 2015. The broader market, tracked by the SPDR S&P 500 ETF (SPY), slipped by ~2.14% during the year.

In this series, we will analyze United Continental’s performance for 4Q15 and for 2015. We will also discuss what factors are expected to drive UAL’s growth in 2016. Finally, we will wrap up the series with a discussion on UAL’s valuation multiple.