Taiwan Semiconductor Manufacturing Company (TSM), the world’s largest contract chipmaker, reported its fiscal 4Q15 earnings that beat the analysts’ estimate. However, the fourth quarter earnings fell for the first time in four years due to the slowdown in demand for high-end smartphones. The company expects the same trend to continue in fiscal 1Q16 as well, and so posted weaker guidance for the quarter. Explore the series to understand the company’s performance in fiscal 2015 and the opportunities and challenges in 2016. 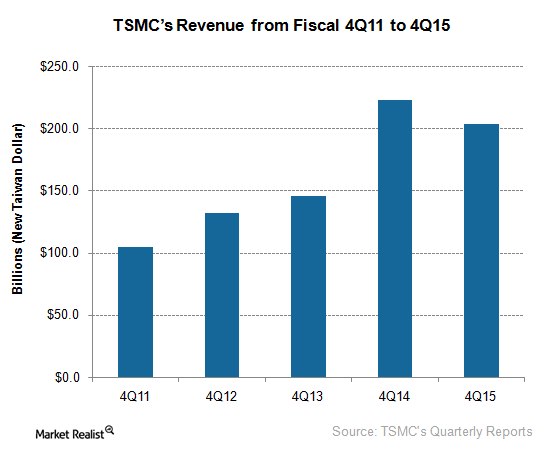 TSMC’s revenue fell 8.5% YoY (year-over-year) in fiscal 4Q15. However, revenue fell 13.7% YoY to $6.24 billion when calculated in US dollar terms. This was slightly lower than the analysts’ estimate of $6.32 billion. However, the company’s net profit of $2.23 billion during the quarter topped the analysts estimate of $2.03 billion.

The revenue was affected by Apple’s (AAPL) decision to scale back production of the iPhone 6s and 6s Plus to March 2016. TSMC manufactures A9 chips used in iPhone 6s models. Apple’s decision affected many of its suppliers, as Qorvo (QRVO) reduced its guidance for fiscal 4Q15 and 1Q16.

In fiscal 4Q15, the company earned $4.3 billion in cash from operating activities and spent $2.5 billion on capital expenditure. As of December 31, 2015, the company’s total cash reserves and marketable securities stood at $17.4 billion. Despite a fall in revenues and profits in fiscal 4Q15, the company has upped its capital expenditure commitment for 2016 by more than 10% YoY to $9 billion–$10 billion. Rival Intel (INTC) has also committed $10 billion in capital spending in 2016.

In the coming part of the series, we’ll look at TSMC’s overall performance in fiscal 2015. The Semiconductor ETF (SMH) has exposure in 26 semiconductor stocks from the entire supply chain. It has 13.9% exposure in TSM, 18.2% in INTC, and 0.87% in QRVO.