Sugar futures prices for March contracts were trading near the key support of $14 per pound on January 25, 2016. But prices fell sharply on the day along a downward price channel. As a result, the volume of contracts increased by nearly 26.9%, and open interest rose by 0.23% on January 25 due to active prices movements in the near term.

Analysts believe that the speculation of a restricted sugar supply might not last long, however, and prices could decline more sharply and slip below $14 per pound. Sugar prices broke the 100-day moving average level with the fall on the day.

The graph below indicates that prices could continue in the range of $13.8–$14.5 per pound in the near term. 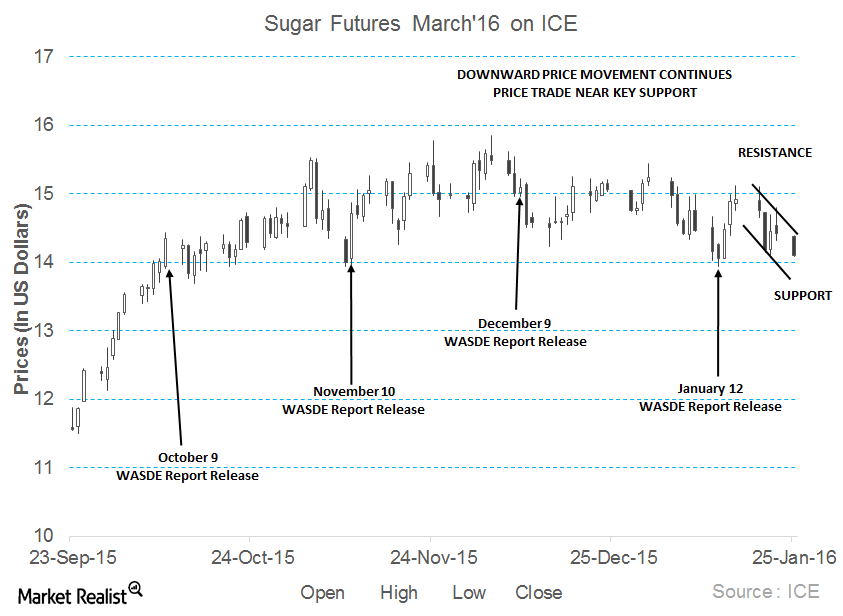 The speculation of cheaper availability from Brazil pushed prices down on January 25, 2016. Meanwhile, the US dollar depreciated by 0.24% on January 25, and because a low US dollar is unfavorable for sugar imports, it kept sugar prices above its support level.

What this means for sugar-producing companies

While falling sugar prices support food businesses that use sugar as an essential ingredient, they tend to hurt companies in the sugar-producing industry. On January 25, 2016, Campbell Soup Company (CPB), and General Mills (GIS) continued their downward price movement, declining by 0.05% and 0.98%, respectively, hindered by the previous day’s advance.