The December 2015 quarter’s earnings season brought with it falling revenues and weaker guidance for almost all semiconductor companies. SanDisk (SNDK) and Texas Instruments (TXN) joined the fray and reported their fiscal 4Q15 earnings on January 27, 2016. Explore the series to understand the performance and future growth prospects of the two companies. 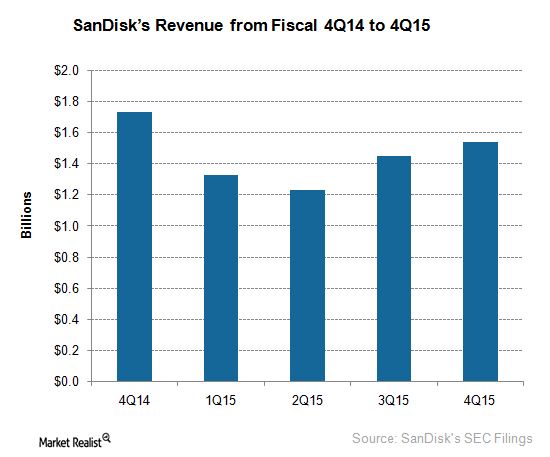 SanDisk, a flash memory storage manufacturer who recently agreed to merge with Western Digital Corporation (WDC), announced its fiscal 4Q15 results that beat the analysts’ estimates. SanDisk’s revenue fell 11.5% YoY (year-over-year) to $1.54 billion in fiscal 4Q15, topping the analyst estimate of $1.44 billion. The revenue growth in the removable segment was offset by a fall in client SSD (solid-state drive) sales. However, sales grew on a sequential basis, with growth picking up in the second half of fiscal 2015.

The company’s non-GAAP[1. GAAP stands for generally accepted accounting principles] EPS (earnings per share) fell 3% YoY to $1.26 in fiscal 4Q15, beating the consensus estimate of $0.89. The EPS fell as more sales came from the retail segment. Note that the segment commands a lower margin.

In the next part of the series, we’ll look at the company’s financial position and guidance for fiscal 1Q16.