Previously in this series, we saw that Qualcomm (QCOM) is signing licensing deals with Chinese handset makers and will likely extend its partnership with Samsung Electronics (SSNLF) to boost revenues.

Meanwhile, the semiconductor company has made the best of the mobile boom. However, with the overall mobile market reaching saturation, the company is now looking to reduce its dependence on mobile and diversify into adjacent markets, which contributed ~10% of its QCT (Qualcomm CDMA Technologies) revenues in fiscal 2015.

Qualcomm has also started developing chips for automotive, IoT (Internet of Things), mobile computing, and networking. Now let’s look at some of the efforts made by the company to excel in adjacent markets. 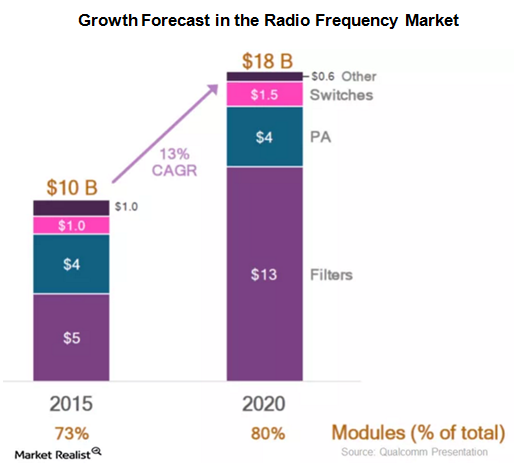 On January 13, 2016, Qualcomm entered into a JV (joint venture) with Japan’s TDK Corporation to develop radio frequency technologies in Singapore (EWS). The JV will support Qualcomm’s RF360 platform, which aims to offer comprehensive radio frequency solutions for mobile devices, automotive, IoT, and drones. Qualcomm plans to invest around $1.2 billion in the venture and hold a 51% stake in it. The venture aims to tap the radio frequency market, which is expected to reach $18 billion by 2020.

Qualcomm is looking to enter the server market dominated by Intel Corporation (INTC), which currently has more than a 99% share. Qualcomm has entered into a $280 million joint venture with China’s Guizhou Province to design and develop server chips for the Chinese market. The company will hold 45% stake in the venture.

Notably, Qualcomm Chief Executive Officer Anand Chandrasekher expects China to become the world’s second-largest server market by 2020, accounting for around 40% of the $15 billion market by 2020. While these updates will not show results immediately, they do show an optimistic outlook for the company in the long-term.

In the next and final part of the series, we’ll look at the recent performance of Qualcomm’s stock.