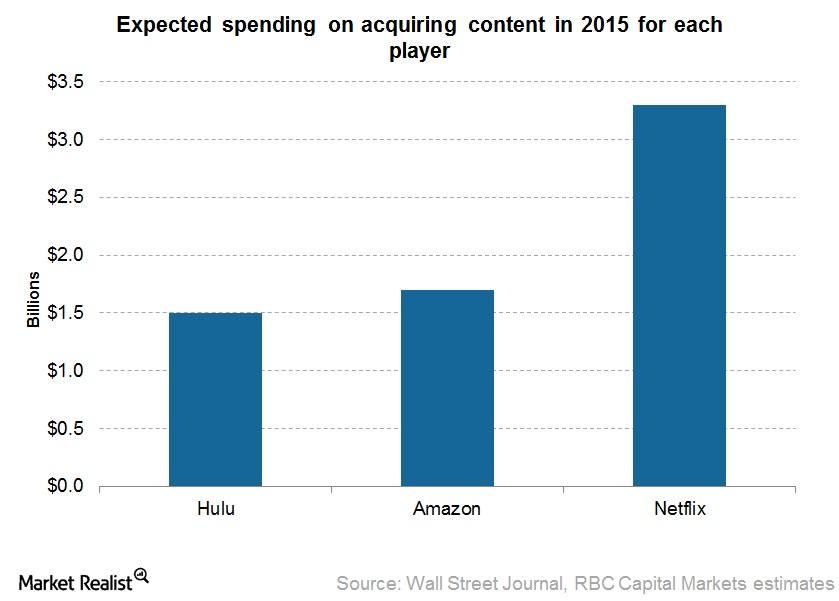 According to a Wall Street Journal report citing estimates by RBC Capital Markets, Netflix was expected to spend $3.3 billion in 2015 on content acquisition. In comparison, Amazon (AMZN) and Hulu were expected to spend $1.7 billion and $1.5 billion, respectively, on the purchase of content in 2015, as you can see in the chart above. Hulu is jointly owned by The Walt Disney Company (DIS), 21st Century Fox (FOXA), and NBCUniversal (CMCSA).

Why the focus on original programming?

Netflix believes that original content can continue to strengthen its brand and drive up viewing hours. Netflix believes that original content targeted at various user groups can increase the viewing hours and encourage viewers to watch shows repeatedly, turning them into potential subscribers. This is why Netflix is aiming for exclusive SVOD (subscription video on demand) rights, or second window rights, for TV shows and movies.

Netflix refused to renew its Epix deal in August 2015 because it wasn’t getting exclusive SVOD rights to Epix movies. Plus, it had a theatrical window that was behind the window of pay-TV operators. Netflix subscribers could watch an Epix movie only after individual pay-TV operators like Dish Network (DISH) aired the movie. MGM, Lions Gate Entertainment (LGF), and Viacom’s (VIAB) Paramount Studios own Epix.

Netflix makes up 0.92% of the PowerShares QQQ Trust Series 1 ETF (QQQ). For an investor interested in exposure to the Television & Radio sector, QQQ has an exposure of 4.37% to the sector.