Corn futures on the CBOT (Chicago Board of Trade), for March delivery, rose slightly by 0.35% and settled at $3.58 per bushel on January 13, 2016. Corn prices rose due to the rise in the corn demand sentiment. The ethanol production rose in the EIA’s (U.S. Energy Information Administration) Weekly Ethanol Plant Production data. The Teucrium Corn Fund (CORN) followed the CBOT and rose by 0.52% on January 13, 2016. 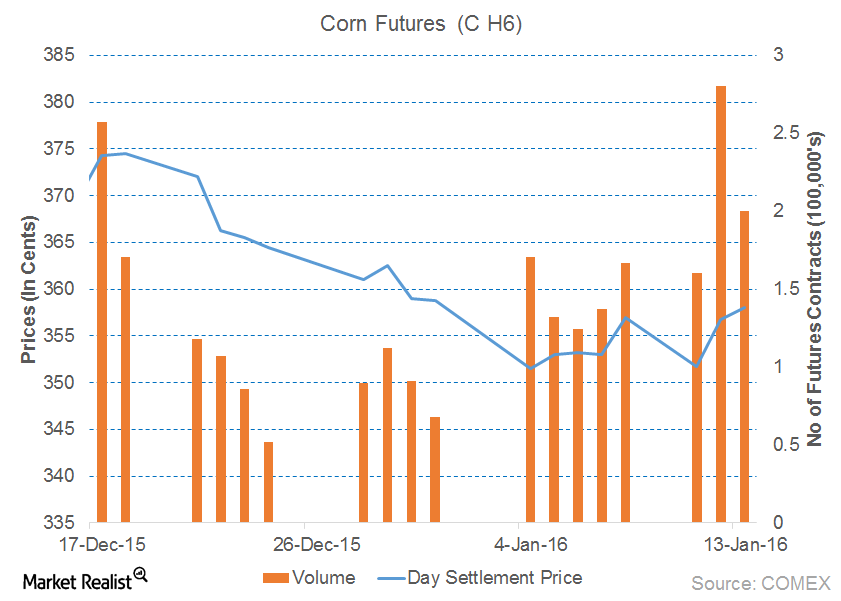 The EIA issued the US Weekly Fuel Ethanol Stocks for the week ending on January 8, 2016. The ethanol fuel inventory of 21.4 MMbbls (million barrels) was 246,000 barrels higher than the last week. It was a record high from the levels in February 2015. Higher ethanol supplies dragged ethanol futures prices lower on January 13, 2016. It had a negative influence on corn. Corn is a significant input for ethanol production.

CONAB is Brazil’s Official Crop Bureau. It released the crop estimates for marketing year 2015–2016 on January 12, 2016. The corn output prospects rose due to favorable weather conditions. They continue to support corn. Moisture in the northern regions and sunshine in the southern regions supported corn’s development. The crop projections were 82.3 million metric tons. However, this was 2.2% lower than the U.S. Department of Agriculture’s monthly World Agriculture Supply and Demand Estimation report. Stronger production cues from the previous week hurt the US export expectation. It keeps futures prices under pressure.