In the previous part of the series, we discussed how BlackBerry (BBRY) has become the leader in the enterprise mobility management (or the EMM) market. We discussed how a number of acquisitions that BlackBerry has made in the past few months contributed to this growth. Another factor behind this growth is the number of the customer wins that the company continues to get, especially in the regulated industry such as financial services and enterprises.

As the chart below shows, BlackBerry’s customer wins have gone up from 2,400 in fiscal 2Q16 to 2,700 in fiscal 3Q16. In the financial services industry, some of the notable names that BlackBerry managed to win deals from are HSBC (HSBC), Berenberg, and Depository Trust and Clearing. According to BlackBerry, Berenberg is VMware’s (VMW) AirWatch replacement. We discussed AirWatch’s position in the previous part of the series. 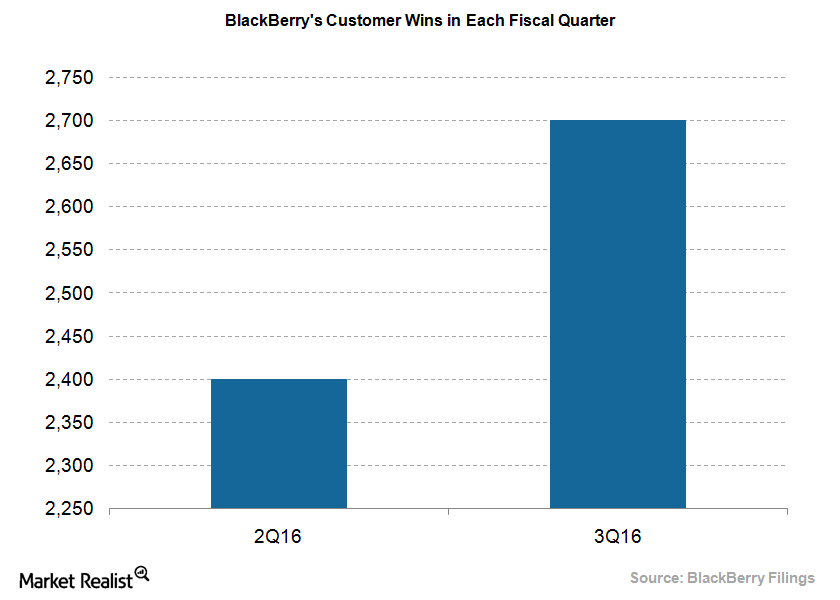 BlackBerry could benefit from the trend of increasing data breaches

BlackBerry also mentioned that it is managing to win client deals in other regulated industries like the legal industry. Skadden Arps, which is one of the largest law firms in the world, chose WatchDox solutions. BlackBerry acquired WatchDox last year.

Another factor that could benefit BlackBerry is the increasing number of data breaches happening with enterprises all over the world. In the last few years, data breaches happened with prominent companies like eBay (EBAY) and Target (TGT). Such a data breach had a long-lasting impact on eBay, which we discussed in Why eBay’s 2014 database breach was one of the worst ever. To gain diversified exposure to eBay, you could invest in the PowerShares QQQ Trust, Series 1 (QQQ). QQQ invests about 0.65% of its holdings in eBay.

BlackBerry solutions are considered to be secure, which is why the company should benefit from the widespread concern over increasing data breaches.