BlackBerry is still investing in its BB10 operating system

In the prior parts of this series, we discussed the state of BlackBerry’s (BBRY) hardware business. Another important part of BlackBerry’s smartphone business is its BB10 operating system (or OS). People had speculated that BlackBerry might decide to get rid of the BB10 OS if it successfully adopts Alphabet’s (GOOG)[1.To gain diversified exposure to Alphabet, you could invest in the PowerShares QQQ Trust, Series 1 (QQQ). QQQ invests about 5.0% of its holdings in Alphabet.] Android OS. But BlackBerry CEO John Chen squashed this speculation when he announced that BB10 is “far from dead,” according to a BlackBerry blog post.

Chen also mentioned that the company will develop only one smartphone in 2016 and that it will be based on Android OS. But this doesn’t mean BlackBerry isn’t focusing on BB10. Chen mentioned that the company will enhance BB10 to add privacy and security features. This way, BlackBerry’s older smartphones based on BB10, such as the Passport and Classic, will become better products. BlackBerry continues to sell these smartphones on the AT&T (T) and Verizon (VZ) networks.

Chen added, “The coming version 10.3.3 will be certified for NIAP compliance, meaning it will have passed the strictest government-grade security tests, enabling us to further support our government and regulated customers who use BlackBerry 10 devices and demand the highest levels of security. We are also planning a version 10.3.4 for later this year with even more security improvements.” 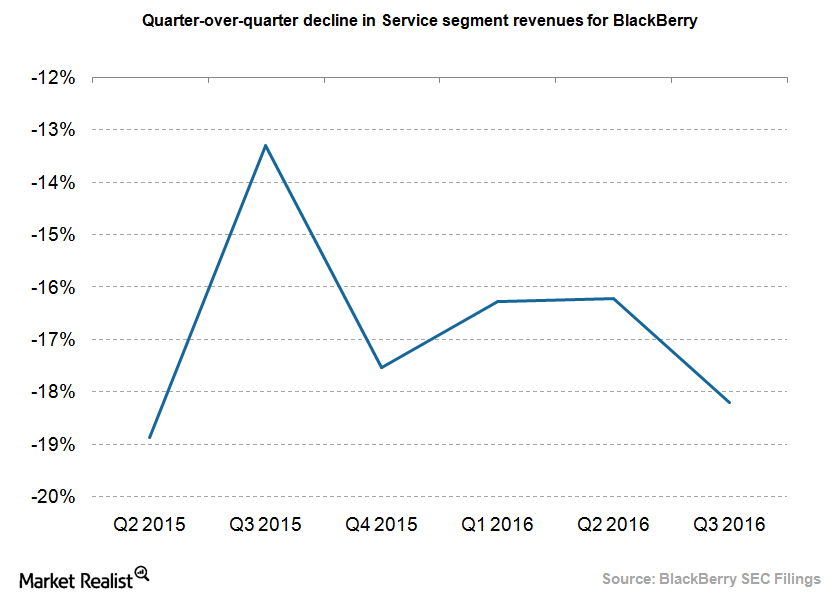 BlackBerry believes it still has a loyal base of highly regulated industry and government customers, which is another reason why it’s pursuing BB10. But the problem BlackBerry faces with BB10 is a lack of monetization opportunities. BlackBerry users who migrate from BlackBerry 7 or prior operating systems to BB10 don’t have to pay a service access fee.

As the chart above shows, BlackBerry’s Service segment revenues fell 18% in fiscal 3Q16 on a quarter-over-quarter basis. Management has stated in the past that it expects a decline of 15% per quarter in its service segment for the remainder of fiscal 2016.