In this series, we’ll look at some points discussed by T-Mobile (TMUS) at the recent Morgan Stanley European Technology, Media, and Telecom Conference held on November 12, 2015. 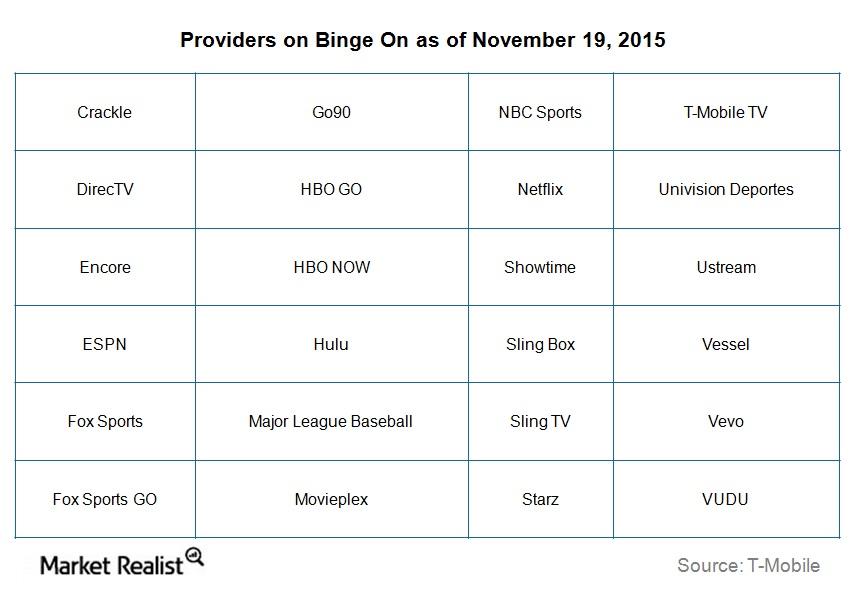 According to Carter, “The Binge On component is very exciting. Targeted to millennials, we’ve whitelisted. And this is available to anybody who ultimately comes to us and wants to be part of this offering. And with the whitelisting, there is no rating of the video consumption, but the agreement there is that we’re going from up to an HD experience down to 480p or DVD-quality.”

According to the company, for applicable streaming services, the Binge On option removes data usage costs of mobile video streaming on relevant plans.

As per the company, streaming providers for Binge On include Netflix (NFLX), The Walt Disney Company’s (DIS) ESPN, Verizon’s (VZ) go90, and AT&T’s (T) DIRECTV.

Mobile competition in the US

T-Mobile’s Binge On component adds a new dimension to wireless competition in the United States.

Video is a prominent part of mobile traffic in the United States. In a saturated US mobile space, video traffic is a particularly important growth driver for carriers.

According to Cisco’s (CSCO) VNI (visual networking index) forecast, video in the United States represented ~60% of overall mobile data traffic during 2014. Moreover, as per the forecast, this traffic is expected to increase annually at an average rate of ~54% during the 2014–2019 period.