Sprint (S) reported its results for fiscal 2Q15 on November 3, 2015. In this series, we’ll look at how the telecom (telecommunication) company performed during the quarter, and we’ll cover some financial and customer metrics.

Sprint’s losses for fiscal 2Q15 were much higher than anticipated by Wall Street. However, the telecom company’s losses did fall year-over-year during the quarter. On an adjusted basis, Sprint’s loss per share was ~$0.11 for the quarter. According to Wall Street analysts’ consensus, Sprint’s adjusted loss per share was expected to be ~$0.07 in fiscal 2Q15. 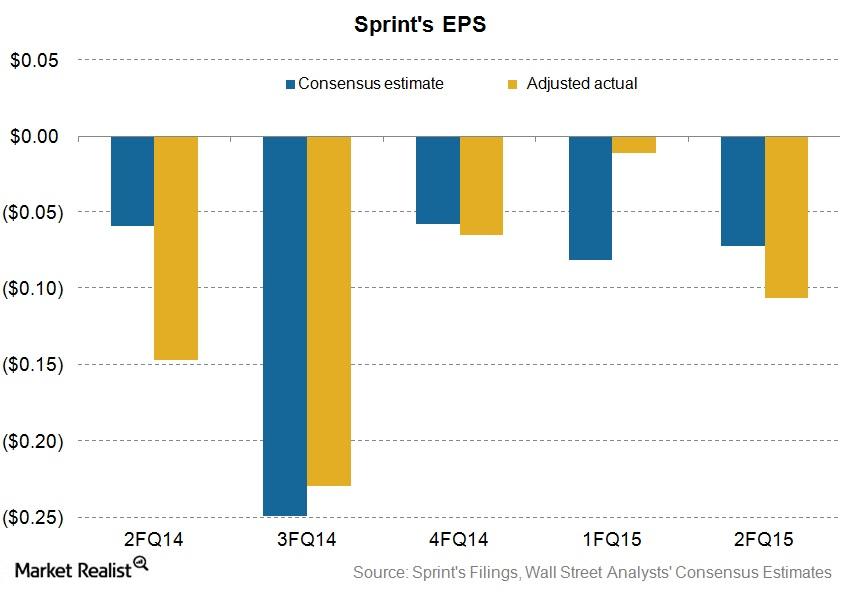 Sprint’s stock price fell ~7% from the previous day’s close on the day its fiscal 2Q15 results were announced.

Sprint has reported losses in each successive quarter since fiscal 2Q14. As you can see in the above chart, the telecom company did beat Wall Street’s expectations in fiscal 1Q15 as well as fiscal 3Q14. Nevertheless, Sprint’s losses were higher than anticipated by Wall Street in fiscal 2Q14 and fiscal 4Q14.

According to Sprint, it expects to have annual operational cost savings of at least $2 billion in fiscal 2016. The company will incur transformation program costs in the remaining period of fiscal 2015 and in fiscal 2016 to achieve this goal. These costs are expected to be in the range of $1–$1.2 billion during that period.

By subscribers, Sprint remains the fourth-largest player in the US wireless industry as of the end of 3Q15, which is Sprint’s fiscal 2Q15. In this market, AT&T (T) and Verizon (VZ) were the top two carriers. T-Mobile (TMUS) had the third-largest wireless subscriber base in the United States at the end of the same quarter.

For diversified exposure to Sprint, you may consider the Vanguard Telecommunication Services ETF (VOX). The ETF had ~1.8% of its holdings in the US telecom company at the end of September 2015.