The US dollar and the Fed’s interest rate hike

On November 17, 2015, LME Copper reached a fresh multiyear low because of a surging US dollar. The glut of copper has been keeping the pressure on copper’s prices since the beginning of the year. In addition to that, the rising strength of the US dollar is dragging base metal prices down. 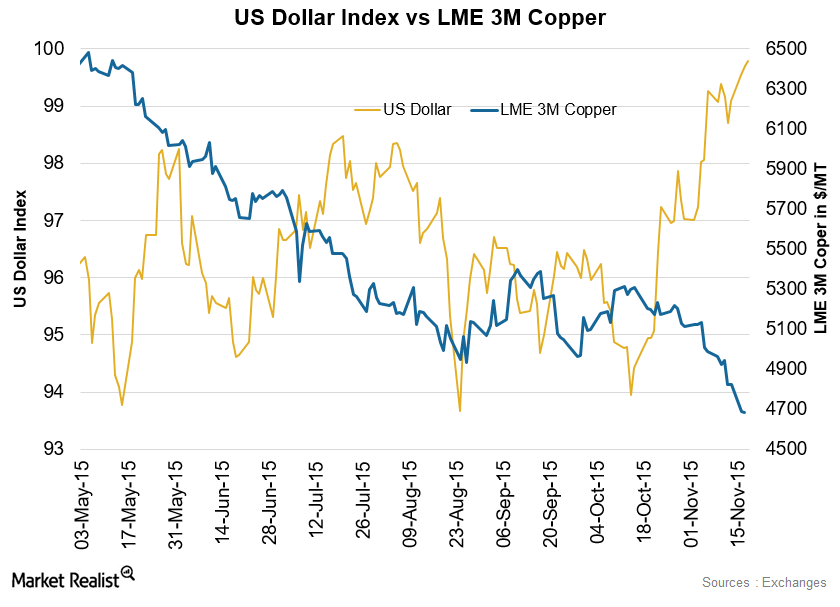 Given the recent situation of copper, we can note that the economic outlooks of China and the US dollar have been driving copper prices. The US dollar shares an inverse relation with copper. Considering data from the last one month as shown in the graph above, copper is falling while the dollar is flying high. As a result of the recent statement made by Fed Chair Janet Yellen, the probability for a hike in the interest rate rose, strengthening the dollar. Yellen said that if US economic releases support growth and expected inflation, then the interest rate hike in December “would be a live possibility.” This worsened the sentiment around copper and other base metals as the increasing strength of the dollar would bring the dollar-denominated base metal prices down.

By studying the supply side of copper, it’s very clear that the support given by suppliers isn’t enough to stop falling prices. The production cuts from major mining companies like Freeport-McMoRan (FCX), Glencore (GLEN), and Asarco (AR) failed to raise copper’s prices. According to the latest data released by the National Statistics Bureau, October’s refined copper production in China rose 1.9% from previous month. This is the third consecutive month that refined copper production in China rose. Also, production hit a four-month high in October. Some investors believe that China’s copper supply will rise until the end of 2016 as many smelters try to meet yearly production targets.

This bearish situation also resulted in falls for major base metal ETFs like the PowerShares DB Base Metals Fund (DBB) and the SPDR S&P Metals & Mining ETF (XME).