Previously in this series, we have discussed various aspects of the Dell–EMC deal. If this deal goes through, Dell and EMC together would make an enterprise solutions company that is expected to have a combined revenue of $80 billion. As a result, increased competition in the enterprise computing space would force players like Cisco Systems (CSCO), IBM (IBM), and Hewlett-Packard (HPQ) to revise their strategies.

With EMC in its portfolio, Dell could enhance its ability to compete well beyond the small and medium businesses (or SMB) market into higher-end enterprise markets. This move could increase the competition for Hewlett-Packard.

On the other hand, HP is going through a turbulent time, as it has already split itself into a high-margin enterprise business and a low-margin PC business. Dell is gaining access to big enterprises while HP has fragmented. Charles King, principal analyst with Pund-IT Research, noted that Dell is “growing at the time that HP is pulling back and fragmenting.” 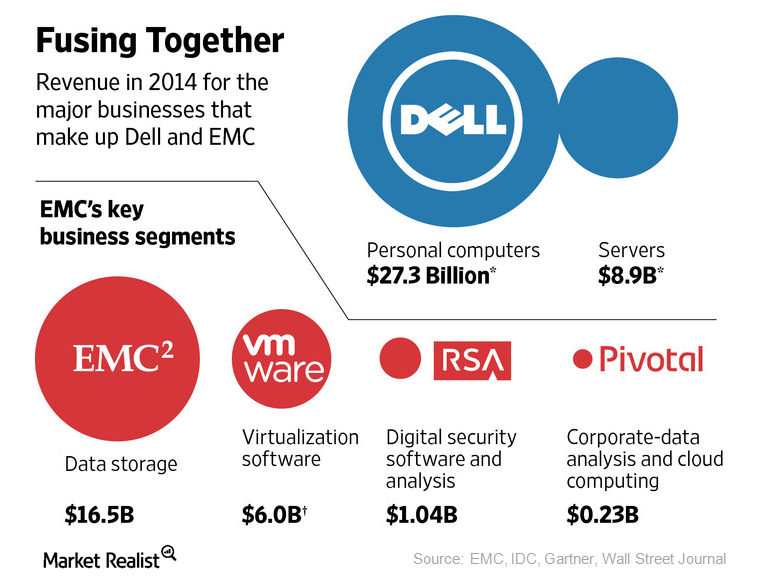 Confusion, threats, and competition in the enterprise computing space

Refuting Dell’s leadership scenario with the EMC buyout, Meg Whitman, Hewlett-Packard’s CEO, opined that the Dell–EMC deal would be a “massive undertaking and an enormous distraction for employees and their management team.” She also pointed that both companies’ “disruptive” efforts to integrate their products would cause “chaos.”

On the other hand, IBM, a leading player in the enterprise computing space, is keen to invest in software platforms and artificial intelligence. Glenn O’Donnell, research director at Forrester Research, noted that these rapidly growing areas are “profoundly futurist.” In fiscal 4Q14, IBM announced that it would invest $4 billion in its strategic imperatives that comprised cloud, mobile, analytics, social, and security technologies.

Cisco’s partners, including EMC, VMware, and other storage vendors, believe that the Dell–EMC merger would force the networking giant to look for an immediate storage acquisition in order to remain competitive. Previously in this series, we discussed potential acquisition targets in the storage space.

You can consider investing in the iShares Dow Jones US Technology ETF (IYW) to gain exposure to EMC. IYW invests about 1.44% of its holdings in EMC.