Soybean November futures contracts trading on the CBOT (Chicago Board of Trade) fell by 1.2% and closed at $8.59 per bushel on November 13, 2015. Soybean futures prices fell due to technical selling after a weaker export sales report. Following the fall in the CBOT, ETFs like the Teucrium Soybean Fund (SOYB) fell by 0.92% on November 13, 2015. 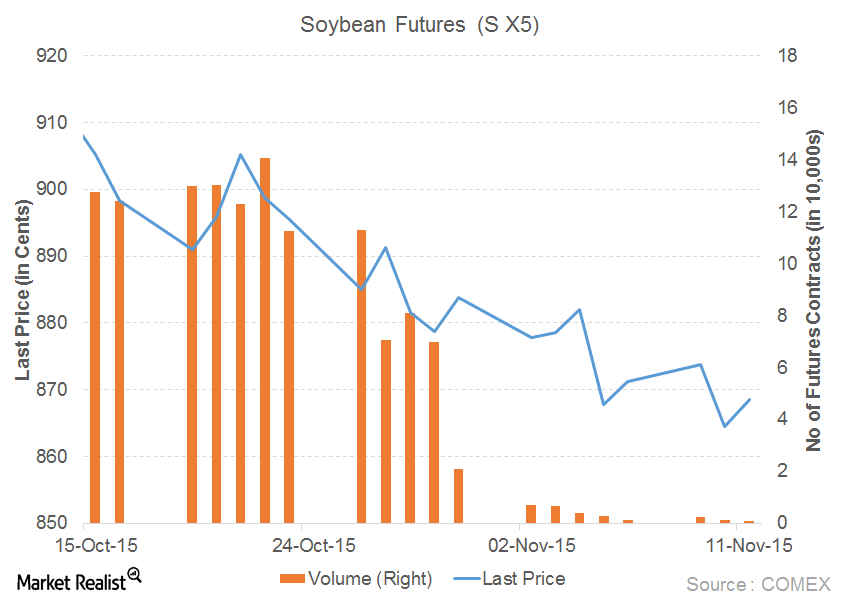 The U.S. Department of Agriculture released the weekly export sales data on November 13, 2015. The data were for the week ending on November 5, 2015. The net export sales for soybeans were 1,296,967 metric tons—up 98% from the previous week but down 14% from the last four-week average. China, Russia, Indonesia, Mexico, Germany, and the United Kingdom recorded a significant rise in the net weekly export sales for the marketing year 2015–2016. Japan also bought 22,000 metric tons of soybeans for the marketing year 2016–2017.

The NOPA’s (National Oilseed Processors Organization) monthly report of crushing activity during October 2015 will be released on November 16. Analysts estimate a rise of more than 19% from the September 2015 crushing numbers to 161 million bushels in the month. This suggests a boost in the local soybean demand. The analysts’ anticipation about the domestic demand might benefit from the trailing exports. They could realize in the week ending on November 20.