On November 16, 2015, all base metals tumbled to fresh lows following the terrorist attacks in Paris. These attacks raised concerns about the global economy and triggered selling on Monday. The major base metal, copper, created a fresh six-and-half-year low on COMEX and the London Metal Exchange (or LME). 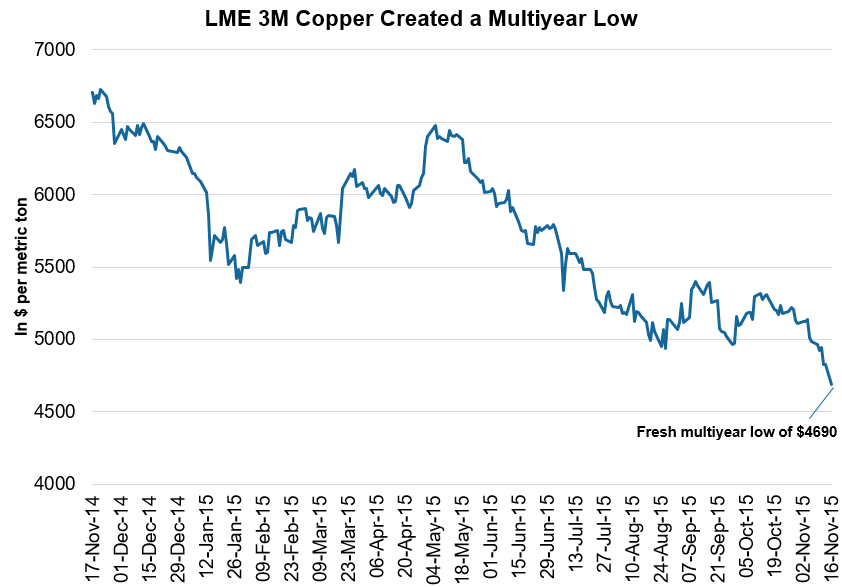 Most investors sold so-called risky assets such as commodities and equities and shifted to safer assets such as the US dollar due to fear of the Paris terror attacks’ effects on the global economy. A string of weak economic releases from China last week resulted in a fall of more than 3% for copper.

On November 16, LME copper fell by 2.8% and reached a new low of $4,690 per metric ton. Last week, weak economic releases from China dragged copper and other base metals to multiyear lows.

Considering the fact that 45% of global demand for copper comes from the world’s second-largest economy, China, China’s economic health has been the main driver of base metal prices.

Over 2015, many major base metals companies such as Freeport-McMoRan (FCX), Glencore (GLEN), Anglo American (AAUKY), and Asarco (AR) announced production cuts and employment layoffs in efforts to support copper prices. Though these production cuts gave temporary support to falling base metals prices, they were not able to stop the fall as the economic situation in China took the driver’s seat.

Recently, the increasing strength of the US dollar and the increasing expectations of an interest rate hike this December have been keeping the pressure on copper and other base metals prices. Following the fall of base metals on November 16, the PowerShares DB Base Metals ETF (DBB) fell by 1.7%.