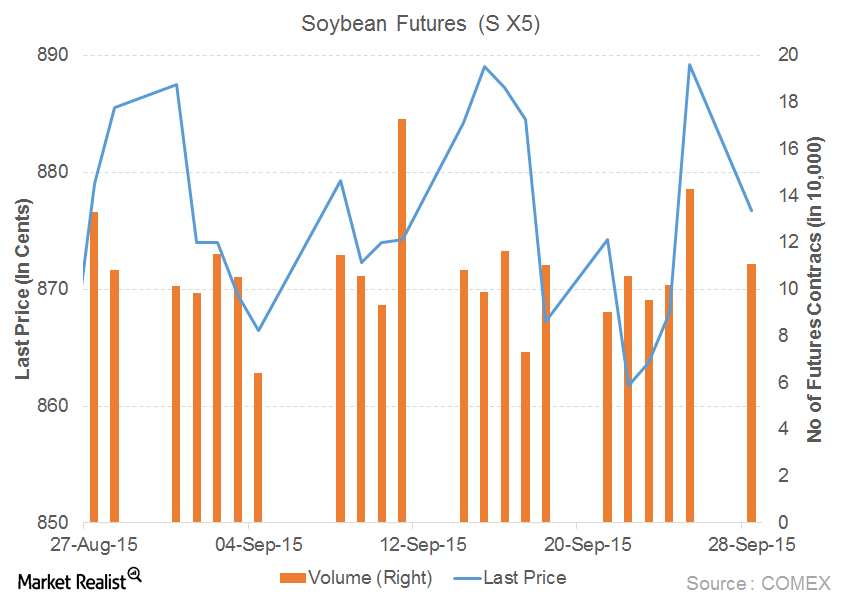 Chinese industrial companies reported that their profits fell by 8.80% in August 2015—compared to the previous year. The news threatens the world markets with another wave of fear about China’s slowing economy. China is one of the biggest soybean importers. It might be affecting US soybeans in terms of exports sales. Despite the “feel good factor” of the contracts on September 24, 2015, the disappointment from the Chinese economy might keep cautious investors on their toes in regards to soybean’s performance.

Soybean’s crop quality deteriorated in the good quality category by 1%. There was an addition to the poor quality group in the U.S. Department of Agriculture’s Crop Progress report released on September 28, 2015. The report was for the week ending on September 27, 2015. The good-to-excellent quality was expected to remain at 62%. The harvest progress rose to 21%. The pace rose due to week-long favorable conditions. The soybean harvest progress rose during this period by 5%—compared to 16% of the last five-year average. Positive quality reports would be adding to the supplied and support prices to the end of the month.

Agriculture sector facilitating companies like Chemical & Mining of Chile (SQM), Syngenta (SYT), CVR Partners LP (UAN), and Agrium (AGU) would benefit from a fall in soybean prices. These businesses would have additional sales to increase production. This is needed to maintain the income from soybeans. The VanEck Vectors Agribusiness ETF (MOO) fell by 2.86% on September 28, 2015. It has interest in these stocks.