In the DIRECTV (DTV) merger press release, AT&T (T) highlights its expected revenue mix at the end of 2015: “The DIRECTV acquisition significantly diversifies AT&T’s revenue mix, products, geographies and customer bases. As a result of this acquisition, as well as AT&T’s acquisition of Iusacell and Nextel Mexico, AT&T expects that, by the end of 2015, its largest revenue streams will be, in descending order: Business Solutions (both wireless and wireline); Entertainment & Internet; Consumer Mobility; and International Mobility and Video.” 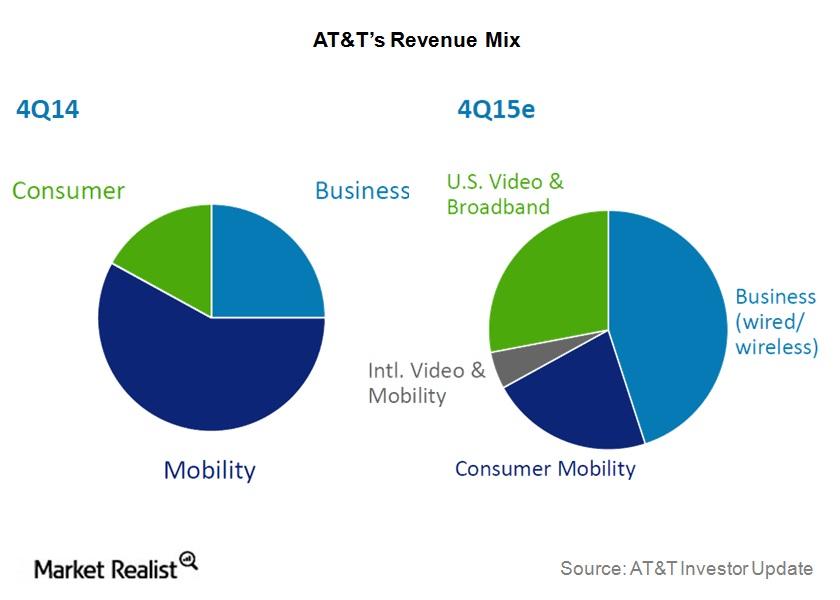 AT&T gave guidance on its expected 4Q15 revenue mix during the 4Q14 earnings call. As you can see in the above figure, the firm’s revenue mix should transform significantly. In 4Q14, the Mobility, or wireless, segment was the largest contributor to AT&T revenue. It was followed by Business Solutions—the wireline segment. Consumer Wireline was the smallest segment.

AT&T completed the Iusacell deal during 1Q15. According to the telecom company, Iusacell offered wireless coverage to ~70% of Mexico as of January 16, 2015. Iusacell generated revenue of ~$236 million in 1Q15, and it had ~6 million subscribers at the end of the quarter.

In 2Q15, AT&T’s international segment generated $491 million in revenue, including results from both these entities.

Instead of investing in AT&T stock, you may consider diversified exposure to the company by investing in the Technology Select Sector SPDR Fund (XLK). The ETF had ~4.6% exposure to the telecom company as of June 30, 2015. Please note that the ETF also held ~4.8% in Verizon (VZ) on that same date.

You may get even more diversified exposure to the carrier by investing in the iShares Russell 1000 Value ETF (IWD). IWD had ~1.8% exposure to AT&T at the end of June.