A few days back, Apple (AAPL) announced the launch of Sony (SNE) Network Entertainment’s PlayStation Vue service on the iPad. The service will have an app for the iPad that users can download to then watch on-demand and live sports, shows, and movies. However, users will be required to subscribe to the service attached to the PlayStation 3 and 4.

This isn’t the first time Apple has partnered with content providers for users to stream content on its devices. A few days back, CBS (CBS) announced that it will start offering Showtime, its standalone streaming service, on Apple devices in July for $10.99 per month. In April this year, Apple announced the availability of its HBO Now streaming service on Apple devices for $14.99 per month. HBO is Time Warner’s (TWX) premium TV programming service. 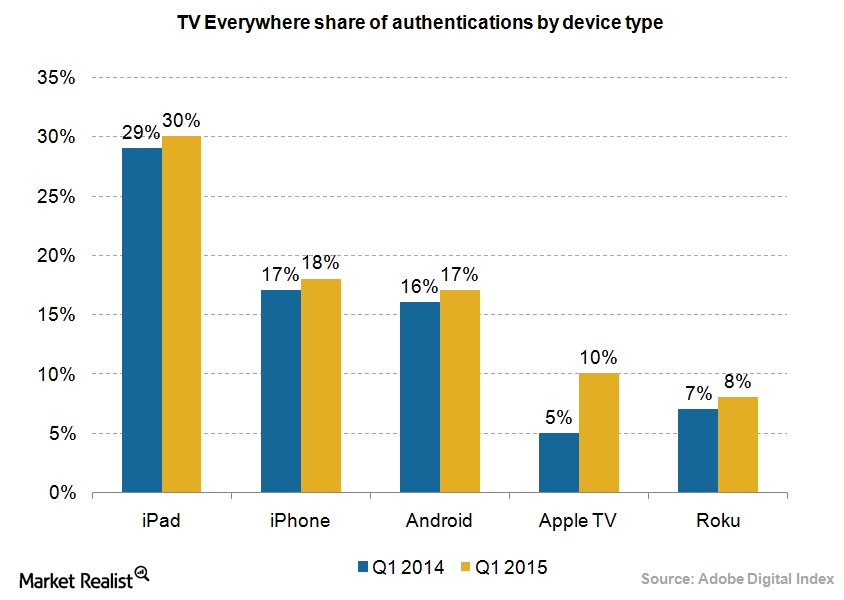 Content providers are interested in tying in with Apple simply because Apple’s devices are immensely popular ways to stream video. According to the Adobe Digital Index Q1 2015 Digital Video Report, the iPad, iPhone, and Apple TV took the first, second, and fourth positions for devices used in streaming online video for the TV Everywhere service. The above chart shows that Apple devices make up about two-thirds of the share for consumer TV Everywhere use.

To get diversified exposure to Apple, you can invest in the PowerShares QQQ Trust, Series 1 ETF (QQQ). QQQ invests 14.3% of its holdings in Apple.