As we have seen in the earlier part of the series, Cisco’s (CSCO) acquisition of Piston Cloud is in tandem with its strategy to build its cloud services infrastructure. Cisco’s Cloud Services architecture is also built on OpenStack open source software. The company disclosed that its acquisition of Piston Cloud Computing is in sync with its strategy to build its InterCloud offering. The company’s earlier acquisition of Metacloud has also boosted its global InterCloud platform and architecture. 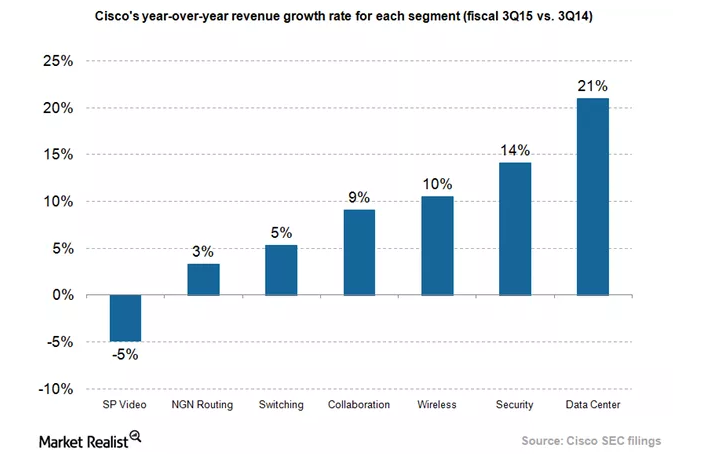 According to Cisco, InterCloud now serves over 400 data centers across more than 50 countries. Some of the partners that have joined the InterCloud push are Deutsche Telekom, BT Group, NTT Data, and Equinix (EQIX).

Cisco’s InterCloud has been instrumental for its growth

According to a report from the IDC (International Data Corporation), Cisco’s worldwide servers system revenue grew at a YoY rate of 19% in calendar 4Q14, much faster than the overall market growth of 1.9%.

In comparison, the two leaders in this market, HP (HPQ) and Dell, showed slower growth. IBM (IBM) is another major player. It showed large negative growth mainly because it divested its x86 server business to Lenovo last year. Oracle (ORCL) is another smaller player in this market.

If you’re bullish about Cisco’s prospects, you could invest in the PowerShares QQQ Trust, Series 1 (QQQ). QQQ invests about 3% of its holdings in Cisco.