In the last part of this series, we learned about FiOS’s contribution to consumer wireline revenues of Verizon (VZ) in 2014. We also learned that Internet speeds offered by FiOS are comparable to those offered by cable companies such as Comcast (CMCSA) and Time Warner Cable (TWC). Now we will look at FiOS on a standalone basis. 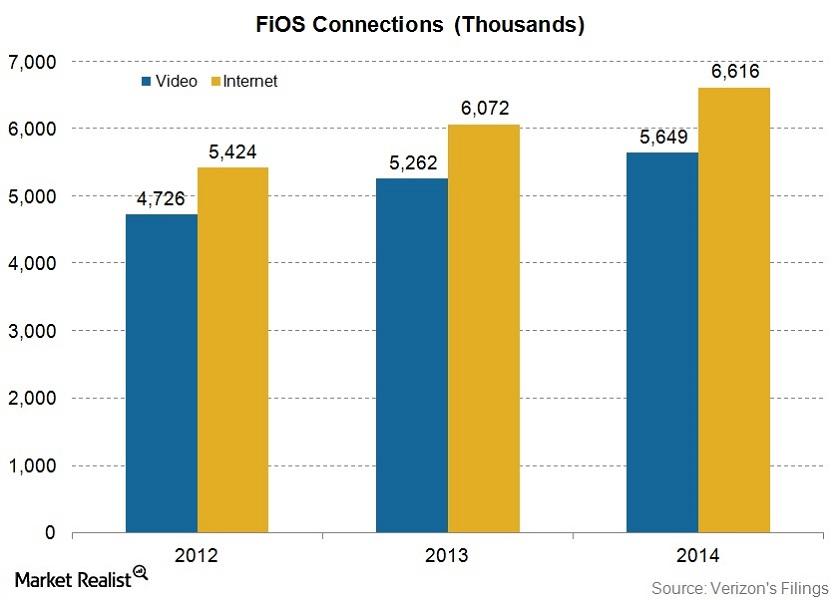 FiOS provides voice, video, and Internet services to consumers and businesses. FiOS was a ~$12.7 billion revenue stream for Verizon’s wireline division in 2014. However, consumer wireline is the dominant FiOS segment. An estimated 93% of FiOS revenues came from consumer wireline in 2014.

FiOS revenues continued to grow robustly, by ~13.6%, in 2014. Higher FiOS per connection revenue contributed to this growth during the year. FiOS subscribers increased by ~8.2% during the year.

FiOS Quantum is a high-speed Internet service that can provide speeds of 50 Mbps or more. The penetration of Quantum in FiOS’s consumer Internet subscribers is increasing, and it expanded from ~46% in 2013 to 59% in 2014. This higher contribution of Quantum customers should have positively affected FiOS’s per-connection revenue in 2014.

If you want to take a diversified exposure to Verizon, you can invest in the iShares Russell 1000 Growth ETF (IWF). This ETF held ~1.8% in the telecommunications company on March 31, 2015.

You can take a more diversified exposure to Verizon by investing in the iShares MSCI ACWI ETF (ACWI), which held ~0.5% in the company at the end of March.