A summary of Macy’s fiscal 2014 performance

As discussed in previous parts of this series, Macy’s (M) fiscal 2014 net sales increased by 0.6% to $28.1 billion and adjusted earnings per share (or EPS) registered double-digit growth of 10%, compared to the prior year. About 0.95% of the portfolio holdings of the Consumer Discretionary Select Sector SPDR Fund (XLY) are allocated to Macy’s. 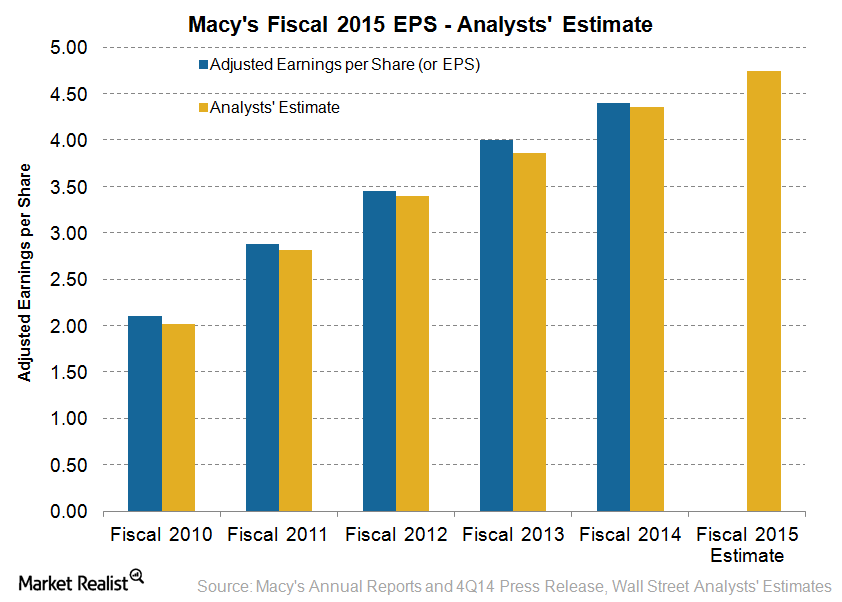 The company’s fiscal 2015 earnings outlook includes the impact of the West Coast port slowdown, which has already affected inventory, mainly apparel and accessories. The dispute between port operators and dock workers, which caused major delays in shipments, has now been resolved. Macy’s indicated in its 4Q14 conference call that ~12% of its 1Q15 merchandise receipts are being delayed.

Macy’s expects its My Macy’s localization approach and omni-channel strategy to drive its top line growth. Through its omni-channel strategy, the company has integrated its stores with its digital channels like online and mobile. Macy’s continues to target key consumer demographics through its merchandise. In February 2015, Macy’s launched its private brand, Thalia Sodi, named after the famous Latino artist Thalia.

Macy’s is also looking for growth in international markets like Abu Dhabi, where it has announced the opening of one Macy’s store as well as a Bloomingdale’s store, slated for opening in 2018. The company will also test its prowess by venturing into off-price stores. Rival Nordstrom (JWN) has been able to offset the weakness in its full-line stores by expanding its off-price Rack stores. Key off-price retailers include TJX Companies (TJX) and Ross Stores (ROST).