Return on equity is important parameter for shareholders

Return on equity (or ROE) is defined as net income divided by shareholder equity. Expressed in percentage terms, it signifies the amount of money available to shareholders after accounting for all expenses.

All else remaining constant, it is better for a bank to have a high return on equity. However, a bank may also increase its ROE by taking greater risks, such as disbursing high-risk loans. It’s important to exercise some discernment while looking at a bank’s ROE. Banks with a combination high ROE and a low bank efficiency ratio are the best. 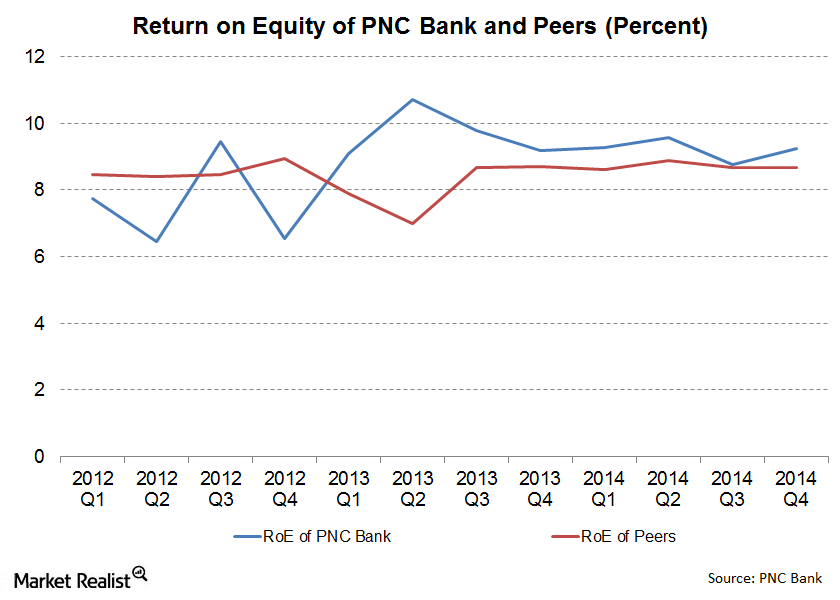 PNC Bank has improved its return on equity

PNC Bank (PNC) performed worse than the sector during the earlier part of the decade, and its return on equity fell below 7% in a few quarters during that period. However, in the last two years, the bank has improved its ROE, largely brought about by three factors. Increasing net interest and non-interest income helped in increasing revenues, and containing non-interest expense helped the net income directly. All this led to PNC Bank improving its ROE to above 9%.

PNC Bank is now outperforming the sector averages in this important return indicator. Most of the banks in the portfolio of the Financial Select Sector SPDR ETF (XLF) have lower ROEs than PNC Bank. The future plans of the bank indicate that this outperformance is likely to continue in coming year.

ROE lower than some competitors

However, the increase in ROE is still not sufficient to match the top-performing banks. US Bank (USB), Capital One (COF), and Wells Fargo (WFC) are the best-performing banks. These three banks earn an exceptionally high return on equity for shareholders, and their ROEs are higher than PNC Bank’s by 3.5%–5.0%.