Melco Crown Entertainment (MPEL) reported its third quarter results on November 6, 2014, with net revenues of $1,124.1 million, down 10.3% year-over-year (or YoY). Adjusted property earnings before interest, taxes, depreciation, and amortization (or EBITDA) decreased by 9.8% YoY to $305.7 million for the third quarter of 2014. 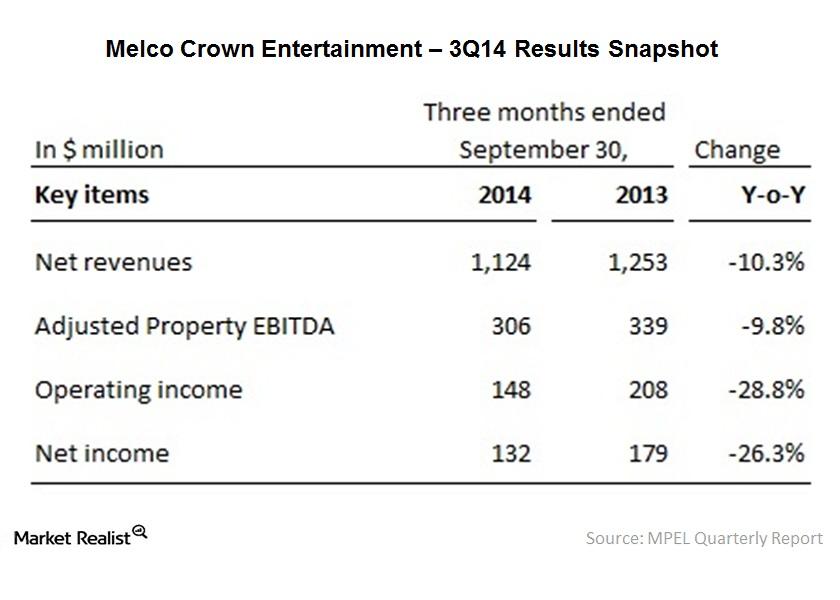 Net income attributable to Melco Crown Entertainment for 3Q14 was $132.2 million, as compared to net income of $179.4 million in 3Q13. In the third quarter of 2014, Wynn Resorts (WYNN) reported a 1.4% decrease in net revenues. However, its adjusted property EBITDA increased by 5.2%. Las Vegas Sands (LVS) reported a 1.0% decrease in net revenues, while its growth in adjusted property EBITDA remained almost flat in the third quarter of 2014.

To avoid the risk of investing in a single casino stock, investors may expand their exposure with ETFs, such as the Consumer Discretionary Select Sector SPDR Fund (XLY) and the VanEck Vectors Gaming ETF (BJK).

In November 2014, Lawrence Ho, cochairman and CEO of Melco Crown Entertainment, commented, “In the third quarter of 2014, we delivered solid operating and financial metrics, despite a challenging rolling chip environment in Macau, driven by a strong performance in our mass market operations at City of Dreams in Macau. City of Dreams continued to gain market share in the mass table games segment in Macau, with the property’s mass market table games revenues in the third quarter of 2014, increasing 24.0% on a year-over-year basis, outpacing the market, which grew 16.2% during the same period.”