The US is a large country. It’s divided into 50 states. Consumption trends across the states and regions help identify demand centers in the country.

Rhode Island experienced the highest year-over-year, or YoY, electricity consumption growth for September. The electricity demand grew by 10.6% in September—compared to the same month last year. 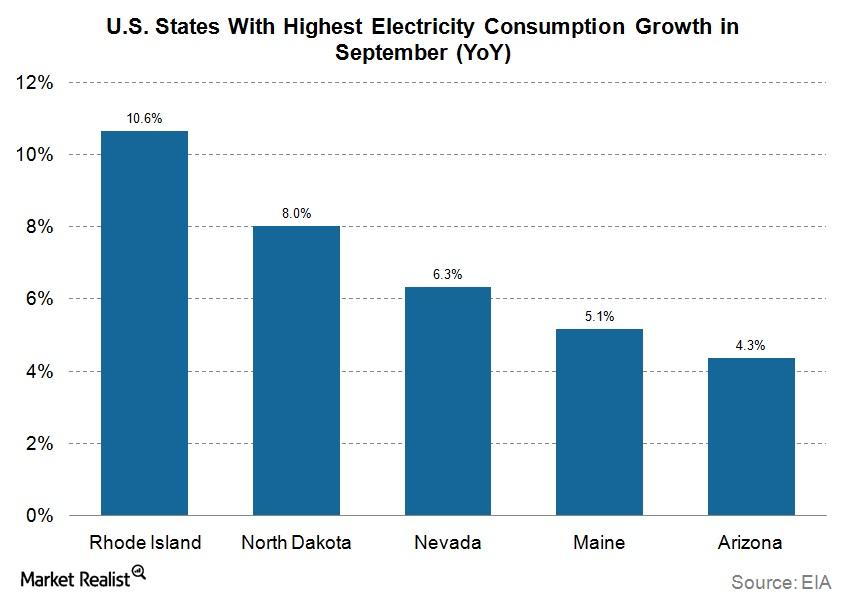 Other states with high consumption growth

After Rhode Island, North Dakota registered the second highest YoY growth in September. Its electricity consumption grew by 8% in September—compared to the same month last year. Xcel Energy (XEL) and MDU Resources Group (MDU) operate in North Dakota. They should benefit from the increased electric demand in North Dakota.

The top five states with highest YoY electricity consumption growth for September were:

Texas consumes the most electricity among all of the states in the US. It grew by a healthy 2% in September—compared to the same month last year. American Electric Power Company (AEP) and CenterPoint Energy (CNP) are major power companies that operate in Texas. They’re part of the Utilities Select Sector SPDR (XLU).

In terms of division growth, the Pacific Contiguous region had the highest consumption growth. The region grew by 2.8% YoY for September—compared to the same month last year. It was boosted by increased demand in California and Oregon.