American Airlines operated a total of 1,535 aircraft as of September 30, 2014, composed of 978 mainline jets and 557 aircraft operated through regional carriers. Because its fleet comprises older, less fuel-efficient aircraft, it has been replacing aircraft with newer models. In 2014, American Airlines invested $4 billion in property and equipment primarily related to aircraft purchases.

American expects to take delivery of 100 aircraft by the end of FY14 and another 110 in FY15. The addition of the new aircraft will reduce the average age of its mainline fleet from 12.3 years in FY14 to 10.1 years in FY18. 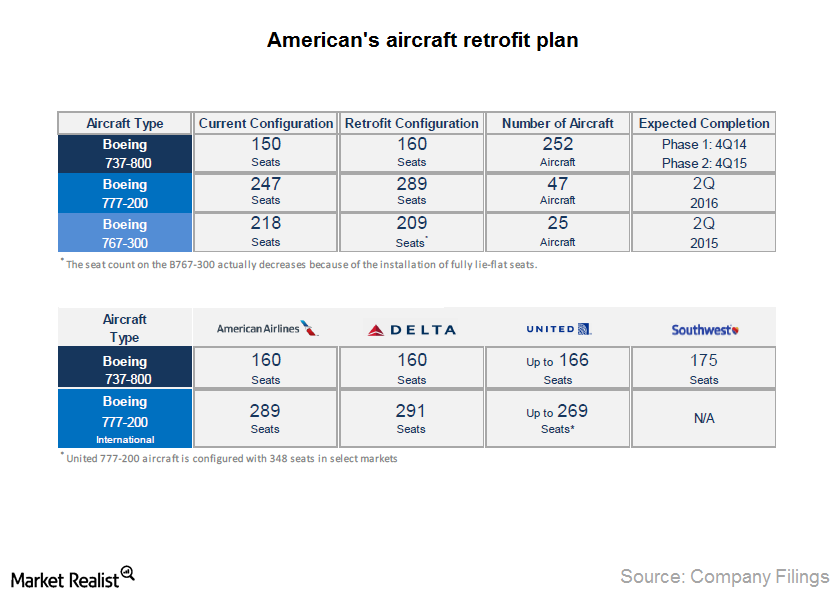 American is also reconfiguring its aircraft to include more seats, allowing it to match the industry standards. The airline will add ten additional seats to 252 Boeing 737-800 aircraft by the end of FY15. By 2Q16, it plans to increase the number of seats on 47 Boeing 777-200 aircraft from 247 seats to 289 seats. The seat count on Boeing 767-300 aircraft will decrease from 218 seats to 209 seats because it plans to install seats that lie fully flat.

American expects to increase its capacity by 2% to 3% in FY15, and the management states that 1.5% of the increase will be due to aircraft reconfigurations and upgauging. ETFs that hold airline stocks include the SPDR S&P Transportation ETF (XTN) and the iShares Transportation Average ETF (IYT).