BHP is the world’s largest supplier of seaborne metallurgical coal. Its main customers are in China, India, Japan, and Europe. It includes BHP Billiton Mitsubishi Alliance, BHP Billiton Mitsui Coal (BMC), and Illawarra Coal. The majority of its contracts are based on annual or longer-term volumes. Prices are mainly negotiated on a monthly, quarterly, or spot basis. 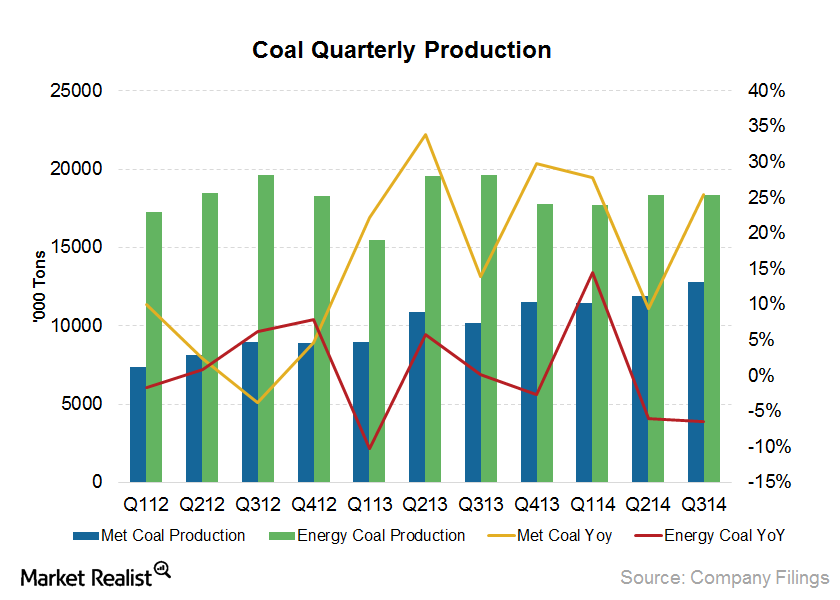 Met coal production increased by 25% in the September quarter to a record 13 million tons. This was due to record production at Queensland Coal. The new Caval Ridge mine operated at capacity. The Daunia and South Walker Creek mines also produced at a record rate.

Energy coal production decreased by 9% to 18 million tons. A drought in the La Guajira region of Colombia constrained volumes at Cerrejon. At New South Wales (or NSW) coal, adverse weather conditions and unplanned plant outages resulted in a 12% decline in production during the period.

BHP closed 6.8 million tons of its highest-cost metallurgical coal production at Norwich Park and Gregory. At Queensland coal, it fundamentally reset the cost base. This led to unit cost decline of 43% in two years. It’s targeting another 10% reduction in fiscal year 2015 to below $90 per ton. The company is planning to achieve this by increasing throughput from its installed infrastructure. BHP’s aim is to stretch the potential of its existing infrastructure and equipment in its iron ore and coal divisions.

Many companies reported a loss for the quarter ending in September. The losses followed lower coal prices. Alpha Natural Resources (ANR) reported a loss. It’s the biggest metallurgical coal producer in the US.

Peabody Energy Corporation (BTU) and Walter Energy Inc. (WLT) are also struggling to recover costs due to low coal prices. This led to production cuts and idled mines across the board. These companies are part of the VanEck Vectors Coal ETF (KOL).